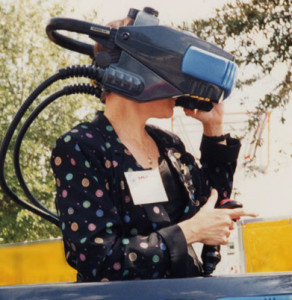 Dr. Jacquelyn Ford Morie has spent 25 years researching and creating Reality (VR) to deliver meaningful, enriching personal experiences. Her work focuses on skillful combinations of multi-sensory, perceptual techniques for VR that predictably elicit emotional responses from participants. With her company All These Worlds (alltheseworldsllc.com), she has been active in social VR, creating Mindfulness applications, storytelling and stress relief experiences for veterans and soldiers. In 2016 she concluded a project for NASA called ANSIBLE, a full virtual world ecosystem designed to provide psychological benefits for future astronauts who will undertake extremely long isolated missions to Mars. ANSIBLE was tested in an analog facility called HISEAS in Hawaii, where a team of six scientists was sequestered for a full year to simulate the conditions of isolation on Mars, including long communications delays.

Morie is also active in the AR communities, developing not only courseware for a week-long intensive AR boot camp class at Upload in 2018, but also with a startup for AR Tourism she founded in 2013 call The Augmented Traveler.

Dr. Morie’s other research interests include use of personal avatars and how they affect our human selves. She has also invented a novel scent release device for VR called RemniScent, to aid in the evocative power of VR experiences. Dr Morie received her PhD on the topic of Meaningful Embodied Immersive Experiences in 2007 from SmartLab at the University of East London. That thesis, which also covers early female creators in VR can be downloaded at morie.org. She is currently a Member of the Board of Directors at the Virtual World Society, and also serves as a Senior Adviser to the XPRIZE Foundation.